Will fully autonomous cars rule the road in 20 years? - The EE
Skip to content 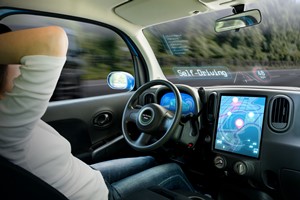 Over the last 20 years, automotive innovation has mostly focused on hardware. But more recently, the automotive industry has started to undergo a significant transformation, manufacturing electric and hybrid cars which are increasingly connected.

As Huibert Verhoeven, SVP & GM, Automotive, Mobile and Emerging Technologies, Western Digital says, the end goal is to create fully autonomous cars which are capable of making the driving decisions.

The question is whether these vehicles can rise to prominence on our roads in the next 20 years? To answer this, we need to consider what the future of mobility and transportation might look like.

The drive towards full automation

To become truly connected and autonomous, vehicles need to incorporate advanced driving assistance systems (ADAS), capable of taking control from human drivers. These vehicles will be designed to continuously accumulate, process, and share data, which will be used to inform everything from training artificial intelligence (AI) systems to developing new business models. However, this degree of autonomous driving, referred to as Level 5, is likely years away from mass commercial adoption.

To put things in perspective, automotive companies are currently focusing on perfecting Levels 2 and 3 – which refer to features such as automatic braking, adaptive cruise control, and other advanced systems.

Developing fully autonomous cars will be a challenge that entails new automotive innovation. Radar, sensors, cameras, LIDAR and edge computing must work together to gather and process environmental data to inform real-time driving decisions. This will require vehicles to have huge storage capacity, an estimated 2+ TB per vehicle in this new decade. Both the volume of data accumulated, and the potential costs associated with transmitting it are unlike anything that has been seen in the automotive sector before.

While autonomous driving tends to be the centre of attention, it’s worth taking a moment to reflect on the meaningful progress that has already been made in connected cars. The current trend is vehicle-to-everything (V2X) communication, which enables cars to send and receive data with other devices through links that are high-bandwidth, low-latency, and high-reliability.

Infotainment and navigation systems are also getting major upgrades. These features are now becoming standard, providing convenience and entertainment through apps for music, streaming, weather, parking, refuelling/recharging stations, and more. If cars become more automated, infotainment might expand to new areas such as in-vehicle shopping or personal services.

Last but not least, navigation technology is moving from static, to high-resolution connected maps. This shift requires large amounts of data to be stored and processed from 3D maps, operating system software, human-machine interfaces (HMIs), and user data.

Drivers, passengers, and pedestrians are understandably concerned about the safety of autonomous vehicles. They question whether this approach to transportation really is safer than human driving.

These concerns call for a delicate balance between regulation and innovation. Transportation authorities must weigh how to properly oversee self-driving technology as it reaches Levels 4 and 5, without impeding innovation that could prevent accidents and save lives on the road.

On their side, many automotive companies have made significant changes to their testing policies and procedures for self-driving cars. They are doubling down on safety, such as using multiple human drivers to override vehicles and following new testing protocols. In addition, they are looking to provide greater transparency and access to information about autonomous driving data to regulators and the general public.

The role of data storage in autonomous vehicles

Inevitably, data will be at the heart of achieving efficient, safe autonomous vehicles.

The information accumulated from the early networks of connected and autonomous cars will be used as the base training dataset to help all future cars improve in their decision-making ability. And once drivers are freed from the task of driving, they will be able to engage with more data-intensive infotainment, productivity, leisure, and communication applications.

Additionally, other data-driven services will also emerge depending upon the type of autonomous vehicle. For example, commercial vehicles and robo-taxis will capture more data and require more storage compared to passenger vehicles, due to longer runtimes per day and being the eyes and ears on the road for manufacturers and fleet owners.

In all cases, automakers need a plan to create a data off-loading infrastructure to facilitate the easy transmission of stored data to the cloud to build robust machine learning models and new data-driven services. Having large data storage capacity is just one requirement. An additional consideration is that Level 3 and above autonomous vehicles will need to use a combination of cloud and edge computing strategies to optimise the sophisticated requirements of AI computing systems, high-speed responses, and data transmission costs.

This means that data storage players will become key partners for automotive players, and as such will need to provide stable and reliable long-term supplies. Unlike consumer electronics, supplying to automakers will involve meeting relevant quality standards to prove reliability at high temperatures and other harsh environmental conditions, as well as ensuring the functional safety of the system.

The way we travel in the future will depend greatly on the developments in autonomous driving, V2X communication, and vehicle safety being worked on today. As we look to the future, there are still many questions to be answered. Will most vehicles be electric or gas-powered? Privately-owned or shared?

Automakers, ecosystem partners, and transportation departments are increasingly working together to help vehicles reach new levels of autonomy. While there is still much work to be done, there are also exciting opportunities to pursue over the next 20 years. The future of self-driving cars looks bright.