A ‘real’ use case for Industry 4.0: EagleRail advances port automation - The EE
Skip to content 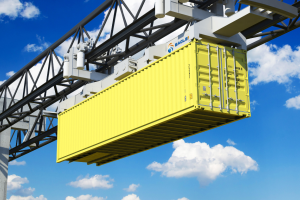 Remember when there used to be C-level keynotes at conferences? I do, vaguely. One thing I remember well is a stream of CIOs and CTOs pitching their visions for digital transformation, automation, the Internet of Things (IoT), artificial intelligence (AI), 5G, Big Data, Blockchain and sustainability.

The grandest presentations, says Ed Finegold, author, analyst, and digital start-up veteran of Silverwolf Productions LLC, often pronounced these technologies would usher in the fourth industrial revolution though they rarely provided firm use cases. Ideas like 5G for remote robotic surgery and space exploration are only half-baked.

Out of frustration, I searched for a company solving tangible problems that sits at the centre of the new tech Venn diagram and wins buzzword bingo without really trying. I found it in port automation specialist, EagleRail Container Logistics.

International seaborne trade has more than tripled in the past 20 years. Despite disruptions caused by COVID-19, it is expected to grow by nearly 3 billion metric tons, to 6.8 billion metric tons, by 2025. Cargo ships are becoming larger too; the latest megaships may carry as many as 24,000 20-foot long cargo containers each.

These factors create a space and time crunch for port operators who need to load and unload ships faster, sort and move cargo containers more efficiently and utilise limited space within ports better. Though substantial ship-facing and rail-facing automation has been implemented, the bit that connects them – short haul conveyance – remains “a dirty diesel truck process,” says Mike Wychocki, CEO of EagleRail.

EagleRail proposes an environmentally sustainable, electric-powered overhead rail system based on technology proven in ports and factories, to augment or replace truck-based short-haul drayage. Put simply, EagleRail “took the port crane design and made it 2 kilometres long rather than 100 metres long,” Wychocki says. Software simulations and feasibility studies conducted with global transportation consultancies like PriceWaterhouseCoopers (PwC) show EagleRail’s approach can increase a port’s effective volume within its existing footprint by 30 to 40% and the speed with which it moves inventory by 50%.

EagleRail’s innovative approach evolved out of an idea that never quite caught on: public transit by overhead monorails. The company originally had a licence to market such systems in North and South America. During a pitch in Sao Paolo, Brazil, a representative from the Port of Santos, the busiest container port in Latin America, asked if EagleRail’s system could move shipping containers rather than transit cars.

He aimed to augment or replace the funiculars the Port of Santos depends on to move cargo from the port at low elevation up steep slopes to transport terminals at higher elevation. Wychocki, then a consultant to EagleRail, saw that meeting the ports’ shorthaul demand would be the company’s best future, rather than people moving, and so bought the company.

For the past five years, Wychocki and his team have visited more than 40 ports in 20 countries finding nearly universal interest in the overhead rail concept. “They’re all automating the ship loading and unloading process,” Wychocki says but still rely on end of life diesel trucks which “generate a massive amount of pollution” to move containers to their shorthaul destinations.

Ports are running out of physical space to manage container volume and the truck-based process is slow, inefficient and faces vehicle and driver shortages. Cities are also fighting emissions more aggressively and want to eliminate the long queues of idling trucks from their streets. The idea of physically transforming the space within the port and digitally transforming how it is utilised has, therefore, become attractive.

To demonstrate its efficacy, EagleRail uses FlexSim 3D simulation modeling and analysis software to create a digital twin that shows prospects how they can deploy and operate the EagleRail system to make their ports far more efficient.

For example, productivity within a port is measured by how its slots are utilised. Slots exist in three-dimensional space and define locations for individual containers. Containers are stacked six across and five high and are laid out in the longest rows the port’s footprint will allow. A typical port may have 30,000 slots, Wychocki says.

Because of the value of the land, there is only so much waterfront space a city can devote to port operations. But cities also want their ports to generate more revenue. If a port wants to grow its volume from 3 million to 5 million containers per year within that fixed space, it must be utilised far more efficiently. Accelerating the pace at which containers are moved in and out of slots increases the volume a port can handle.

Ports are trying to improve how well they match containers with trucks. Currently, a truck will wait in queue for up to 4 hours before it can drive to the back stack – where truck loading happens – to pick up its container. Cranes may have to move many containers to load the correct one. Ports are trying to use AI and machine learning algorithms to stack containers more efficiently. EagleRail offers a complementary approach.

“We know that 50 to 60% of back stack containers come or go to one of two locations, the rail head or the intermodal terminal,” Wychocki says. “The rest are one-off deliveries.” EagleRail proposes to use its solution to move more than half the freight directly to rail and intermodal terminals. The remainder it can move inland to a trucking annex for sorting and pickup. Inland property provides an easier and cheaper way for ports to increase their effective footprints, moves truck traffic out of the city and frees up existing waterfront space for other needs.

Shipping containers are increasingly equipped with IoT sensors which should become more capable in the 5G environment. Putting them all on EagleRail’s system can integrate now disparate data flows, such as from port operations tracking the front stack – where ships are unloaded – to the automated railhead.

“We are very blockchain friendly,” says Wychocki. Paper-based processes are complex and inefficient, “but if you can put all the bills of lading, customs certifications and payments in the blockchain … it all gets transferred while it’s on our system for two hours.” As a result, this big data component of the solution ties the loose ends together and provides the degree of visibility for which stakeholders across the supply and logistics chains clamour.

Eagle Rail closes out the ‘buzzword bingo’ card with a disruptive business case. Rather than presenting the rail system as a product, paid up front, it proposes a private equity-funded approach, like building a toll road. All stakeholders, which can include the port, city, national government, utilities, railways and more, share revenue and all cost to the port is OPEX. In exchange, Eagle Rail and its partners provide a 20-year concession for the port to use the system.

The company performs techno-economic feasibility studies to prove out its disruptive business case. Wychocki says the typical internal rate of return (IRR) for a project is 15% or more, with a total economic internal rate of return (EIRR) – factoring in reduction in pollution, road usage and other infrastructure – of 22%. CO2 Emissions can be reduced by 60%, even in cases where the electric power for the rail system comes from coal-fired plants. And the cost to move each container can decrease by 30% compared to trucking.

While Wychocki admits it is often useful to be viewed as a positive disruptor, it is not something the company wants to “overplay.” He says its positive when customers describe EagleRail this way, but the company is focused on solving a high value problem set for customers. The fact that the port automation it can enable is a bellwether for the fourth industrial revolution is incidental.

For keynote-giving CxOs, Eagle Rail is an example of a tangible use case that too many pitch talks lack. The beauty of innovation is that it is a broad-based process that focuses on problem solving, not a top-down process that touts solutions seeking problems to solve. The fourth industrial revolution won’t appear suddenly as a result of a new technology, but rather because experts will find new ways to use technology to solve well-defined, large scale, high value problems.

Ed Finegold, author, analyst and start-up veteran is a freelance content creator for global scale technology companies and proud to contribute monthly to The Evolving Enterprise. He is a sometime purveyor of fine buzzwords, preferring to use them in context while supporting them with tangible examples. He can be reached at efinegold@silverwolfpro.com