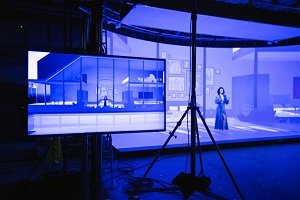 On MARS, virtual 3D environments are mapped onto an LED stage, enabling performers, actors, presenters and products to be blended into a photo-real or imaginary virtual environment in real time.

The benefits of the natural lighting provided by the LED and the director’s ability to update any scene in real time also help to give performers a visual reference to easily orient themselves, in contrast to a traditional green screen where visual elements are added in post-production.

Since then we have been working hard behind the scenes to develop the world’s leading xR production technologies, working with globally renowned musicians, entertainers and presenters to break beyond the physical dimensions of the traditional film location, event venue or broadcast studio.”

“Furthermore, the technology on MARS is ideally suited to the COVID-19 era. Visual content can be produced without the need to travel to different locations while maintaining social distancing, not to mention the environmental benefits of dramatically reducing the power consumption associated with large-scale onsite productions.”