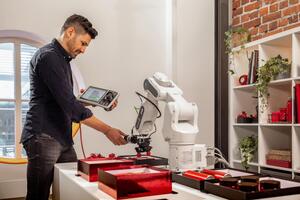 UK manufacturers are expressing growing interest in the potential of robotic automation to help address impacts of the COVID-19 pandemic and protect against future workforce shortages.

A survey of 250 UK small to medium-sized enterprises (SMEs) and large manufacturing companies carried out by ABB Robotics reveals a change in attitudes towards robotic automation in the UK, with 81.2% of companies saying that they are considering an investment in robots because of recent events including COVID-19.

Conducted as part of the launch of ABB’s new GoFa and SWIFTI collaborative robots, the survey shows how the impact of the pandemic has been widely felt by many businesses across the UK, with many affected by restrictions on workforce availability caused by lockdown and strict social distancing measures that have reduced their production capacity.

A particular problem for many businesses has been a lack of contingency planning. Research by People Management magazine in conjunction with the Chartered Institute of Personnel and Development (CIPD) has revealed that two in five organisations had no contingency plans to manage the COVID-19 outbreak as organisations have previously adopted a mentality of “if it isn’t broken, don’t fix it”. This lack of preparation and planning for the future is now hurting organisations as they try to adjust their business operations to the new normal.

The results of the survey suggest that robots are increasingly being seen as a way of addressing this, with 48.8% of respondents stating that they were likely to invest in robotic automation within the next five years.

Regarding the potential of robotic automation to help alleviate the impact of the COVID-19 pandemic on their businesses, 50.4% of the survey respondents reported that robots would enable them to comply with social distancing requirements and avoid cross-contamination. There was also recognition of the value of using robots to help improve workplace safety, with 40.4% stating that robots could help them to meet health and safety (H&S) rules, while 32.8% saw the potential for using robots to help compensate for staff short shortages/ staff illness.

“The huge impact that COVID-19 has had on the economy will be felt long after the virus has gone and will permanently influence the way businesses conduct themselves moving forward,” says Nigel Platt, general manager robotics and automation UK and Ireland. “The inherent flexibility and high performance of today’s robots, coupled with the expanding range of options on offer, from small cobots through to heavy duty industrial robots, enables manufacturers to better prepare themselves against future uncertainties caused by impending pandemics or economic instabilities.”

The survey results also underline the benefits that can be achieved by using robotic automation.

Asks “what have been the main benefits of robots or robotics to your business”, 57% of the 142 companies that are currently using robots in their operations responded by stating that robots reduced operating costs in their business. 42.3% organisations cited that robots improved product quality and consistency and 37.3% claimed that it improved the quality of work and job satisfaction for employees. 32.4% stated it increased production output closely followed by 31.7% who cited that it improved workplace health and safety. 23.9% experienced reduced staff turnover and 23.2% improved the use of space.

The contribution that robotic automation can make towards increased flexibility was also highlighted, with 32% of respondents stating that robots have helped them to increase their manufacturing flexibility and 25% using them to develop new business models and revenue streams.

“While the UK has lagged behind other countries when it comes to embracing robotic automation in manufacturing applications, those companies that have made the switch to robots have reported a range of benefits that underline their ability to transform productivity, efficiency and competitiveness,” says Julian Ware, sales manager robotics and automation UK and Ireland. “The results of our survey provide hope that these benefits will be realised by a growing number of companies in the next few years as robotic automation becomes recognised for its ability to provide a greater degree of certainty in challenging times.”