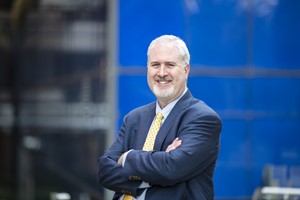 The Cedars-Sinai Department of Computational Biomedicine has received an $8 million (€8.08 million) grant from the National Institutes of Health to study Alzheimer’s disease.

The research, led by Jason H. Moore, PhD, chair of the Department of Computational Biomedicine, aims to study new, leading-edge artificial intelligence methods, and to use those methods to identify genetic predictors of disease risk. Specifically, Moore will look at interactions among various genetic factors to identify patterns that lead to increased risk of Alzheimer’s.

More than 6 million Americans are living with Alzheimer’s disease, and there is no known cure. According to the Alzheimer’s Association, the number of patients in the U.S. is on track to triple by 2050.

“There is a lot of medical knowledge that can be mined to find new answers and new treatments,” Moore says.

The centerpiece of the research project is software Moore developed that uses machine learning to help experts and non-experts alike make sense of what can be an intimidating number of choices when looking at ways to analyse data.

Dubbed Aliro, which is Esperanto for “accessible,” the software can, with the push of a button, provide investigators with meaningful insights and analysis from even the largest data sets. Importantly, Aliro learns from experience. It stores results in a database and can then use that information to recommend further analysis.

“Our goal is to really democratise AI, so that absolutely anybody could use this technology,” Moore says.

Moore’s collaborators, Marylyn Ritchie, PhD, and Li Shen, PhD, at the University of Pennsylvania, will study ways to integrate genetics and genomics data, along with brain imaging data, into the Aliro system. This grant is part of a larger NIH goal to look for new drugs to treat the disease.

“There have been very few new Food and Drug Administration-approved and effective drugs for Alzheimer’s disease over the past 20 or 30 years,” Moore says, referring to the Food and Drug Administration. “That’s something I have in mind all the time that everything we do ultimately leads to new knowledge, new results that could potentially inform the development of new lifesaving drugs. That’s something we’ve been laser-focused on.”

Moore, who developed some of the nation’s first automated machine learning systems in 2015, compared Aliro to the “recommender” systems used by popular e-commerce sites. Moore hopes that, in the same way that algorithms on those sites crunch user data to make personalised suggestions about what users might want to purchase, Aliro will be able to make recommendations to researchers about what type of analysis to look at next.

“That’s kind of what our system is doing,” Moore says. “It’s recommending the next best machine learning analysis and then doing it automatically, and generating the results.”

But Moore’s work doesn’t stop there. He says his focus for the next few years will be figuring out how to get Aliro and other AI software to use expert “biological knowledge” that is, the knowledge humans have built, through trial and error, experimentation, and observation, over thousands of years of existence.

As part of the Alzheimer’s disease project, Moore has pulled together information from more than 20 knowledge databases about genes, drugs, diseases and biochemical pathways. A critical part of his research will be focused on mapping the relationships among these.

“The key research question I’m addressing in this grant is not only how we get artificial intelligence to automate the machine learning, but also how we get it to use all of this knowledge we have about Alzheimer’s disease, to focus the analysis, choose the right variables, interpret models and make sense out of them,” Moore says.