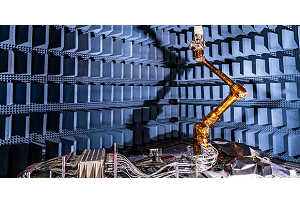 All component-level tests are complete on DARPA’s robotic servicing of geosynchronous satellites (RSGS) program and the on-orbit demonstration mission is on schedule for launch in 2024. The RSGS goal is to enable inspection and servicing of satellites in geosynchronous Earth orbit (GEO), where hundreds of satellites provide communications, meteorological, national security, and other vital functions. Currently, no options exist for visual diagnosis, upgrades, or repairs of a malfunctioning satellite’s components.

Throughout the remainder of this year, engineers will complete testing of the flight robotic hardware and software. Integration of the robotic payload with the spacecraft bus will begin in 2023, followed by testing and verification of the combined system. After launch in 2024, the host vehicle will use highly efficient electric propulsion to climb to GEO. Following a period of checkout and calibration activities, the program anticipates on-orbit satellite servicing activities will begin in 2025.

In 2020, DARPA partnered with SpaceLogistics, a Northrop Grumman company, to provide the spacecraft bus, launch, and operations of the integrated spacecraft in exchange for the ability to use the robotic payload to provide commercial servicing once on-orbit. DARPA is funding the U.S. Naval Research Laboratory (NRL) to lead development of the RSGS robotic servicing capabilities. The on-orbit system DARPA is providing will include two robotic arms, multiple robotic tools, on-orbit checkout and calibration equipment, equipment stowage ports, cameras and lighting, and associated avionics boxes running advanced robotics control flight software. Each arm consists of seven high-strength, high-performance joints as well as a tool drive. Avionics boxes provide power, data, and control services to the arms.

“Through public-private partnership, DARPA will help propel this technology from demonstration to operational capability,” says Saplan. “Soon, instead of relegating satellites to space junk because of a broken part or lack of propellant, our robot mechanic will be making repair ‘service calls’ in space.”

The RSGS arms are robust enough to be fully testable in Earth gravity. Few, if any, other spaceflight robotic arms, either past or in development, meet this design criterion. This characteristic is what makes this combined servicing system singularly capable on-orbit, as well as fully ground testable.

To ensure survival of RSGS during launch stresses and years of operations in the harsh environment of space, both the RSGS robotics payload and the partner-provided bus will undergo extensive testing prior to launch. Major tests include those for basic functionality, vibration stresses simulating those during launch, electromagnetic tests to ensure components work together without interference, and thermal-vacuum exposures that simulate the extreme temperature and vacuum conditions of the space environment. As with most space systems, RSGS is tested in each of these modes at a component level (by joint or box), then after arm assembly, and again at the vehicle level. The first assembled arm has completed functional, vibration, and electromagnetic testing, and is preparing to begin thermal vacuum testing. The second arm is completing integration and will begin environmental testing this fall at NRL.

RSGS is intended to remain in orbit over the long term, solving problems on existing spacecraft as they arise. DARPA designed RSGS with the ability to resupply it during flight with additional tools and hardware, enabling it to solve unanticipated or emerging challenges in GEO. With the advent of this in-space robotic capability, a variety of new services will become possible from rescuing a new spacecraft that encounters a deployment anomaly, to upgrading older satellites that still have useful life. With RSGS, DARPA is establishing the trajectory for an on-orbit servicing industry that benefits both government and commercial clients.