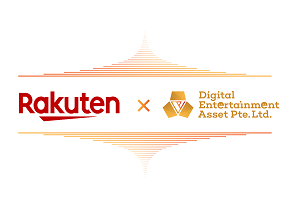 Singapore – Digital Entertainment Asset (DEA), a Singapore-based global Web3 entertainment company that operates the PlayMining NFT gaming platform, announcing that it has signed a memorandum of understanding with Rakuten Group for a collaborative partnership in the Web3 domain. Additionally, Rakuten Group’s corporate venture capital arm Rakuten Capital is making a minority investment in DEA by subscribing to share acquisition rights.

Rakuten Group is a global tech company that provides more than 70 different services spanning e-commerce, fintech, digital content, a mobile carrier business and other communications services, as well as professional sports. Rakuten was an early entrant to the Web3 space, and has already launched businesses such as the NFT marketplace and sales platform “Rakuten NFT,” and its crypto asset trading exchange “Rakuten Wallet,” which supports Bitcoin and a range of cryptocurrencies. The partnership will see DEA and Rakuten collaborate on potential synergies in their respective businesses to further enhance the value of their services.

“We have decided to invest in DEA because of the company’s proven track record on the world stage in the fast-growing Web3 domain under the leadership of an experienced management team,” says Hiroshi Takasawa, president of Rakuten Capital. “I am looking forward to working together with DEA on a number of Web3 business initiatives through this investment. We expect that Rakuten Group’s membership base, brand and business experience and expertise in related areas and DEA’s experience in GameFi, token economy and metaverse business promotion, will contribute to the future business growth of both companies.”

“We are very proud to enter a business agreement with Rakuten Group, a powerful name in the Japanese tech industry, and we look forward to building great things together,” says DEA co-founder and co-CEO Naohito Yoshida. “Our companies have a great number of synergies that we can explore to collaboratively create top-notch Web3 content.”

DEA operates the PlayMining GameFi platform, which features a catalog of Play-to-Earn (P2E) NFT games, including Job Tribes, Cookin’ Burger, Menya Dragon Ramen and the recently launched Graffiti Racer. The platform has a robust NFT marketplace featuring hot content from household names among Japanese anime and video game fans, and a metaverse initiative is in development. DEA also has its own token, DEAPcoin ($DEP), which is the currently P2E token officially approved by Japan’s Financial Service Agency. By having an NFT market, a token and a GameFi and metaverse platform in one place, PlayMining is able to offer IP monetisation opportunities to third-company game studio partners.

“Our vision for DEA is to become the world’s top Web3 entertainment company. Our agreement with Rakuten will go a long way towards helping us work toward this goal by increasing adoption of Play-to-Earn gaming,” says DEA’s other co-founder and co-CEO, Kozo Yamada. “The best way to help promote mainstream adoption of Web3 content is for more competition to enter the space and bring in new users. There is room in this market for all of us!”