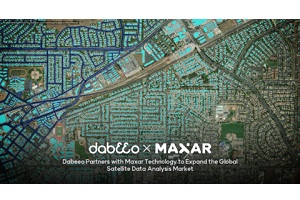 The satellite data analysis market is expanding rapidly in line with the advancement of space industry technologies, which are drawing attention as of late. Dabeeo is widening the applications of its technologies in the market, such as for urban change detection and forest monitoring.

Based on the partnership, Dabeeo will cooperate with Maxar in various areas, including selling Maxar’s satellite images. Maxar is a dominant company with a vast array of high-resolution data in the global satellite image service market. This partnership will allow Dabeeo to provide more flexibly technical collaboration and satellite image data.

“Through the partnership with Maxar, we have secured a framework for the expansion of our business areas,” says Dabeeo CEO Park Ju-hum. “With Dabeeo’s advanced technologies and flexible supply of Maxar’s image data, Dabeeo will gain the ground for the geo-intelligence (GeoInt.) business.”

Dabeeo’s mission is to provide artificial intelligence technologies to reduce repetitive and exhausting operations that have been performed by humans and assist in efficient operation processing and fast decision-making. The company has completed building change detection projects in large cities and ecosystem monitoring in national parks across Korea. Dabeeo is also conducting studies in the field of REDD+ (Reducing Emissions from Deforestation and Forest Degradation Plus) in order to contribute to Carbon Zero.

For more information on Dabeeo’s AI technology can be found at Dabeeo.